In June of 2009 I left for an adventure to Barrow, Alaska.  Barrow is on the “North Slope” of Alaska, and is the northern-most settlement on the North American mainland and in the United States.  Less than 4,000 people live in the area.

I went to Barrow to install a high-availability XenServer cluster that ran virtual servers which have been collecting weather data wirelessly from weather stations in the area.  The servers collect the data and then transmit it via a satellite link to servers at the University of Cincinnati.  The project was funded by the National Science Foundation (NSF) as a grant to the University of Cincinnati.  The project was directed by Dr. Richard Beck.  My brother Andrew Rettig organized the project.  The goal of the project was to improve the collection of weather data in remote locations.  Previously, scientists had to visit expensive isolated weather stations on a regular basis to collect weather data.  Here are some scientists collecting data the old-fasioned way: 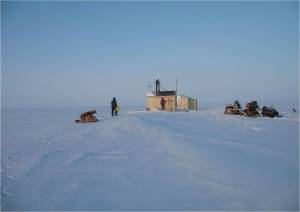 This project utilizes off the shelf hardware and software to allow near real-time data collection, while at the same time reducing the cost of a weather station from $40k to under $2k.  The stations communicate on a localized 700Mhz wireless network back to the Barrow Alaska Research Center (BARC).  Here are the communications towers on the BARC and the wireless network coverage:

This trip was an adventure for me because not only did I get to setup the servers at the Barrow Alaska Research Center (BARC), but I was also able to assist with setting up some of the weather stations out on the tundra.  Luckily we did this work in July, so the temperatures during the day were above freezing.  Also, the sun is out 24 hours a day, so the nighttime temperatures aren’t all that different from the daytime.